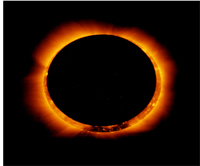 Solar Eclipse 2020 – get the answers to all your questions here. Discover the date, time, and more information here.

The answers to all your queries concerning Solar Eclipse 2020 are present in this article. Moreover, we will also explain about its types, prohibitions during this time, remedies to avoid the malefic effects of the curse, and more. You will also learn about the Sutak Kaal - when it begins, things to avoid, and tasks to do during this period. Find out how many Solar Eclipses 2020 will occur and when. Read on, and you will get all the information you need about this astronomical event and its astrological perspective.

This year, in 2020, there will be two Solar Eclipses occurring. The first Solar Eclipse 2020 will be visible in India and will fall on 21 June. This will be an Annular Solar Eclipse, i.e., the Moon will cover only the central part of the Sun, due to which the latter will look like a fiery ring in the sky. In addition to India, this Solar Eclipse will be visible over the Indian Ocean, Southeast Europe, Africa, and North America as well.

As for the second and last Solar Eclipse of the year, it will occur during the final month of the year, i.e., December. During this Total Solar Eclipse , which is falling on 14 December, the Moon will blanket the entirety of the Sun, making it go dark when seen from the Earth. This eclipse will be perceivable in most parts of South America, as well as the southern part of the African continent, some areas of the Pacific Ocean, and the Indian Ocean.

Solar Eclipse 2020 Dates And Their Timings

Solar Eclipse is a celestial event that occurs every time the Moon comes in between the Sun and the Earth. This event can occur only when these three celestial bodies fall in a straight line in their revolutionary orbits. Science defines an eclipse as an event during which, when three celestial objects are in a straight line, and the shadow of one falls on the other, causing darkening of the surface.

In the same vein, during a Solar Eclipse, the Moon comes between the Sun and the Earth. This creates an apparent darkening of the Sun due to the Moon’s shadow falling on the Earth. When seen from the Earth, it looks like the Moon has blanketed the Sun. However, this is not the truth because the Sun is, in reality, much larger than the Moon. This effect appears only because of the vast distance between the two luminary planets.

What Astrology Has To Say About Solar Eclipse:

On the flip side, astrology defines the shadow planets, and demons, Rahu-Ketu as the perpetrator of this event. As per an old mythological tale, after the Samudra Manthan (Churning of the Ocean), Amrit came out of the Ksheersagar (Ocean of Milk) as one of the 14 gems. When the Lords and the Demons fought over the Nectar of Immortality, Lord Vishnu, in his avatar of the beautiful apsara Mohini, very cunningly deceived the Asuras. He distributed the Amrit to the Gods and gave only wine to the Demons.

When a demon named Swarbhanu, on understanding the scheme of the Lords, stealthily sat down with them to drink the nectar, the Gods Surya and Chandra recognised him. As they singled him out to Lord Vishnu, the latter cut the former’s head with his Sudarshan Chakra, thereby splitting his body into two. However, by then, the demon had already drank the nectar and became immortal. As a result, his head was now called Rahu, and his body Ketu.

Scriptures suggest that Rahu and Ketu take revenge on Surya and Chandra Devas regularly, by cursing them. Since Sun and Moon revealed Swarbhanu’s truth, therefore, the demons cause an eclipse of the planets. Due to their immortality, Rahu and Ketu are also considered shadow planets in the celestial sphere

Solar Eclipse 2020 From An Astrological Perspective

The Solar Eclipse is an essential event from an astrological point of view. As per the Vedic Jyotish, the first Solar Eclipse of the year will occur during the Mrigashira nakshatra and zodiac sign Taurus . On the other hand, the second Solar Eclipse will fall in the Jyeshta nakshatra and Scorpio sign. Although the eclipses will influence all zodiac signs, more or less, however, their effects on these signs will be more direct.

Vedic Astrology considers the Sun to be the significator of the soul. It is also the ruler of the nine planets (navagraha). The luminary planet is the Lord of the zodiac sign Leo , whereas it remains debilitated in the sign of Libra.

The Sun From An Astrological Perspective

The Sun is the most crucial part of the Solar system because all the planets revolve around it. Life on Earth is possible because of this fiery ball of gases, and the weather changes are also due to it. As per astrology, the Sun remains in a zodiac sign for almost a month, and then it makes its transit to the next sign. This time between the transits of the Sun is known as a Solar Month.

Similarly, its Transitory motion is a Sankranti. Makar Sankranti is a widely celebrated festival amongst the Hindus. It is the Sun’s transit in the zodiac sign Capricorn from the zodiac sign Sagittarius.

The planet, nearest to the Sun, in the Solar System is Mercury. The conjunction of these two planets in one’s birth chart results in the very auspicious Budhaditya Rajyoga. Natives with this yoga in their kundali have a very sharp mind, and they perform well in government services. Such natives are also excellent leaders, and they do not lack money. In the same vein, the natives who have Surya favourably placed in their kundali also get high posts in the government sector.

The Sun In Kundali

Although Lord Shani (Saturn) is the son of Lord Surya, however, they have enmity between them. Therefore, Saturn and Sun are considered inimical planets in astrology. The presence of these planets together in a native’s kundli causes an inflow of problems in their life. In the same vein, Venus is also considered the enemy of the Sun while Jupiter, Mars, and Moon are its friendly planets. If the Sun is posited with its friendly planets in one’s birth chart, then it offers positive results to the natives. Whereas, the presence of its enemy planets with it, weakens it.

The Hindu Panchang is also calculated based on the Sun. The duration of one sunrise to the other is known as a Date (Tithi). On the whole, the Sun has a vital role to play, in astrology.

Pregnant women are asked to follow particular precautionary measures during the Solar Eclipse. At this time, after the Sutak period begins, they should not do tasks like sewing, embroidery, spinning, weaving, etc. as they are said to affect the baby’s body negatively. They should also avoid going out during this time. Moreover, cutting or peeling of vegetables, and any tasks involving the use of knife, fork, scissors, etc. are also said to be inauspicious. Not following these cautionary measures are supposed to affect the baby in their womb adversely.

Things To Do During Solar Eclipse For Pregnant Women

To keep their child safe and healthy, pregnant ladies should worship the Gods and Goddesses during the Solar Eclipse. Paying homage to their deity during this time bestows the baby with the blessings of the Lord. Reading holy scriptures in this duration also eradicate the harmful effects of the eclipse from their baby.

Mantras To Chant During Solar Eclipse 2020

Chanting a mantra fills one with positive energy and vibes. Singing the following mantra 108 or 1008 time, during the Solar Eclipse too will banish the negative energies from around you, and you will receive positive results.

Additionally, you can also chant the Tantrik and beej mantra associated with the Sun, on the day of the Solar Eclipse.

Moreover, worshipping the Surya Yantra during the Sutak period also saves one from the adverse effects of the curse. You will receive the blessings of the Lord Sun.

Precautions To Take During Solar Eclipse 2020

Even science agrees that looking at the Solar Eclipse with naked eyes can be harmful to us. Therefore, one should always use safety goggles if they wish to view the eclipse. In the same manner, astrology also qualifies a Grahan Dosha. Astrology also describes the Sutak Period during an eclipse in detail. While the scriptures prohibit many tasks during the Sutak Kaal, there are still several which should be done to avoid many doshas.

Things To Do After Eclipse Ends

Once the Solar Eclipse has ended, do the following to get rid of the aftereffects of the Grahan Dosha:

We Hope That This Article On Solar Eclipse 2020 Was Informational For You! MyKundali Wishes You A Happy And Safe New Year!