This year Nag Panchami will be celebrated on Monday, August 5, 2019. The festival of Naag Panchami is dedicated to worshiping snake lords and seek safety from their poisonous bites. On Nag Panchami, observe fast and follow the rituals to get blessings. Read on to know more about Nagpanchami festival. 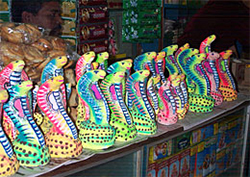 This year, Nag Panchami will again be celebrated at a large scale, in almost all regions of the country. You can also offer prayers on this Naga Panchami and get your wishes fulfilled.

The days of Nagula Chavithi and Nag Shashthi are also dedicated to the snake gods. Nagula Chavithi 2019 date is October 23. It is celebrated on the fourth day of the bright fortnight (Shukla Paksha) in Hindu month, Shravan. On the day of Nagula Chavithi, the devotees worship the seven headed god and milk is offered to him.

Hence, be ready for this Naag Panchami for receiving the blessings of the nine sacred snakes. Before proceeding toward celebrating the Naag Panchami, let’s have some more knowledge about the festival of Nag Panchami.

As per the Hindu scriptures, there are nine snakes that are to be worshiped on the day of Naga Panchami. Hence, on Naag Panchmi, you can also worship them and earn their blessings. These are:

Hence, on this Nag Panchami, try to avoid committing such things and please the snake gods on this Naga Panchami.

So, do not forget to worship the snake gods on this Naag Panchmi in 2019, by reciting the above mentioned Mantra.

The festival of Nag Panchami has many legends associated with it. Let’s have a look at few of the legends of Naga Panchami, so that, there should be a sound knowledge about the reason, before celebrating the festival of Naag Panchami. 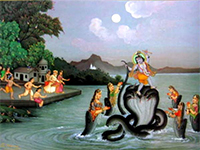 It is said that once Lord Krishna was playing with his friends by the side of Yamuna river. While playing, the ball got stuck in a tree. Hence, Krishna decided to get down the ball from it. As he was trying to do so, he fell down in the river. People used to say that there lived a very poisonous and a big snake, Kalia. As soon as

Lord Krishna fall down in the river, Kalia Naga came to bite him.

However, Krishna had a fight with the snake and won over the battle. Kalia Naga requested Krishna not to kill him. Krishna accepted his request, but took a promise that he would leave the Yamuna river and will not harm people, anymore. Since then, the victory of Krishna over the serpent is celebrated as Nag Panchami.

Legend Of A Farmer And Serpent

As per the legend, there was a farmer who had two sons and a daughter. One day, while the farmer was ploughing the field, the children of snakes caught under it and died. The mother of those children, Nagini (female snake) decided to take revenge from them. While everyone fall asleep at night, the Nagini came and bit the farmer, his wife and the sons.

When next morning the Nagini came to bite the daughter of farmer, the girl put some milk in bowl to please her. The girl requested to forgive the farmer and others, as they committed the mistake, unknowingly. By this nice behavior of the girl, the female snake got happy and decided to give back life to farmer and his family members.

It is said that the incident happened on the fifth day of the Hindu month, Shravan. So, from that day onward, people worship snakes to keep themselves protected from the anger of snakes. Since then, the day is celebrated as Nag Panchami.

Nag Panchami: Fast For The Day

Hence, follow all the rules of fasting on this Nag Panchami and be the one to earn blessings of snake gods.

The rituals of the day of Nag Panchami are followed with great devotion and belief. However, there are different rituals in different parts of the country. Like, in Punjab, a big statue of snake is created and it is being taken in different villages of Punjab. There, people worship it and give a bath of milk to the idol, also offer scented flowers to the idol. People dance and sing along with the parade of idol. At the end, the idol is being buried and the ritual comes to an end.

As per the rituals of Maharashtra, the snake charmers carry the snakes in snake pots. Women offer flowers, Haldi (turmeric powder), Sindoor (vermilion) and milk to those snakes. The snake charmers also carry the cobras along with them, to the temple. There, people worship them with full devotion.

The rituals of Nag Panchami have always been the same, as always. Hence, on Nag Panchami, people would again follow the same rituals and become the part of this grand celebration on Naag Panchami.

The day of Nag Panchami is celebrated in almost all the regions of the country. At some places, people worship the live snakes. Offering of milk and turmeric powder to the snake gods, comprises the part of Nagpanchami celebrations.

People often worship the snakes by bathing them with milk, to seek their blessings and to get safety from their bites. In parts of West Bengal, Orissa and Assam, the goddess of serpents, Goddess Mansa, is worshiped. However, in Karnataka the close bonding of a brother and sister is celebrated on Nag Panchami.

Hopefully, this information on Naga Panchami will help you to celebrate the Nag Panchami festival with more dedication and devotion. Follow all the rituals and ways to please the snake gods on this Naag Panchami.