Sun is the prominent source of vitality and energy on Earth. Life additionally exists on account of Sun's light. This daylight is considered as ray of hope and joy for numerous individuals, and provides light energy to illuminate the entire world. As per different places and locations, Sunrise and Sunset time differ due to the regular rotation of our Earth on its own axis, which also causes an axial tilt. This distinction in time occurs at different places at a particular point of time.

You would be able to know about the Sunrise time and Sunset today timings through printing or electronic media. In any case, these timings are dependent on Astronomical value. However, Hindu astrological timings may marginally contrast from Astronomical timings. We have described these timings for you in tabulated form below as per Hindu Panchang. With this table on Mykundali, you would be able to know about Hindu sunrise and sunset timings.

Note: Time below is in 24 hours format. 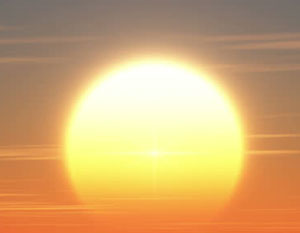 Astronomically, Sun is a star set in the focal point of close planetary system. Although, it is considered as a Planet in Vedic Astrology. It is exceptionally powerful and a strong Planet in Astrology. It is considered as "King" in celestial cabinet and a royal planet, which also illuminates planet Moon with its light. In fact, these two planets if set inverse to each other, or 180 degree apart from each other, forms a strong Yoga in your Birth Chart. In case of weak Sun in your Kundali, you may confront sufferings identified with your position or notoriety among general public.

Surya Dev, or Sun, is the father of Shani Dev. It is a significator planet for Soul. It also signifies "Father" in a Horoscope. It is a Sattvik planet and is Kshatriya by caste. It is also malefic and brutal in nature. It gets directional strength in Tenth House of a natal chart and directional weakness in Fourth House.

It governs "Leo" Zodiac sign and gets exalted in "Aries" sign. In Kaal Purush Kundali, it rules over Fifth House.

Sunrise Time can be clarified as the time of first appearance of the upper limb of Sun. The whole process looks like Sun is passing over the horizon. It is said that Sun ascends from East, according to Science, it shows up because of the continuous movement of Earth. Additionally, Sun is considered as a fixed star in the solar system, and other objects are revolving around the Sun.

As per Hinduism, sunrise time can be ascertained as aggregate of Astronomical Sunrise, i.e. time taken by Sun to rise half of its diameter and time taken by Sun to rise further with a specific end goal to neutralize refraction impact. In Hindu Sunrise, we maintain a strategic distance from the refraction, or simply avoid the refraction, as it is still visible even if it is below the horizon due to refraction effect. Here at MyKundali, we have given you the Sunrise today time according to Hindu Calendar.

Sunset is the time in evening when light of the Sun vanishes or blurs away. It causes due to every day rotation of Earth. This Sunset time is also called as "Sundown". The time of sunset differs consistently throughout the year, and is fundamentally analyzed through the viewer’s position. Due to earth’s rotation on its own axis and axial tilt, Sun appears down in the West direction.Therefore, it is said that Sun sets in the West.

As per Hinduism, Sunset time is computed by deducting time taken by the Sun to set half of its diameter, and time taken by Sun to set further to neglect the refraction effect of Astronomical sunset. On MyKundali, we have tabulated the sunset today time for your benefit, and is according to Hindu Calendar.

In general, individuals do have confusions about sunset time and dusk time. The questions may arise like, “are dusk time and sunset time same?”. For which the appropriate response is "No". The circle of Sun gets completely vanished, yet at the same time, there is some light visible in the sky. This time is known as dusk time.