This Eclipse 2020 page has been created to provide you with all the information on Solar Eclipses and Lunar Eclipses occurring this year. Let us first discuss what an eclipse is. When a celestial body comes in between two others, the shadows thus created cause an eclipse. We mostly use this word for a Solar or Lunar eclipse. This page on Eclipse 2020 contains all information on the eclipses that will occur this year. 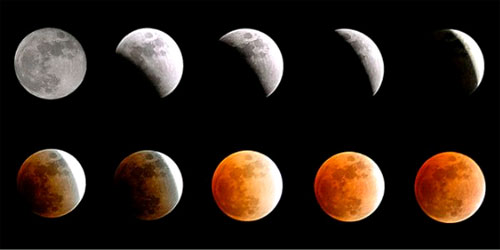 Read on to find out ways of evading the adverse effects of the eclipse, and remedies and precautions to follow to get rid of the Grahan Dosha.

We can majorly qualify an eclipse as one of the two types, namely:

The Moon's position is between the Sun and the Earth during a Solar eclipse. In the same manner, the Earth comes in between the Sun and the Moon during a Lunar eclipse. The Earth's shadow falls on the Moon, blanketing it, and making it seem dark. Interestingly, during a Total Lunar eclipse, the Moon looks red when seen from the Earth. This is because the Sun’s rays reach the Moon after passing through the Earth's atmosphere. Sunlight penetrates the atmosphere of the Earth and the gaseous layer present, scatters the light such that it gives the Moon a reddish cast.

The year 2020 brings four Lunar eclipses and two Solar eclipses with it. Let us read on to find out how these will affect our lives.

The very first Solar eclipse 2020 will occur on 21 June. In this, the Moon, rather than blanketing the Sun completely, will instead only cover its central part. Thus, this will be an Annular Solar eclipse. This Solar eclipse will be observable in India as well as most parts of Africa, America, North America, Indian Ocean, and the Pacific Ocean. This is a crucial Solar eclipse from India's perspective, as it will be visible in the country, and therefore Sutak will be valid during it.

The final Solar eclipse 2020 will occur in its last month. During this, the Moon will completely cover the Sun, thus causing a Total Solar Eclipse. It will be visible over the southern part of the African continent, parts of the Pacific Ocean, as well as the Indian Ocean.

Click Here To Get Detailed Information About Solar Eclipse 2020 .

The year 2020 is bringing four Lunar eclipses with it, and interestingly all of them will be Penumbral Lunar Eclipses. During these, the Moon will pass through the penumbra part of the Earth's shadow, which slightly dims the lunar surface, making it go dark. Here are the details of the four Lunar Eclipses, given below:

The first Lunar eclipse of 2020, occurring on 10 January, will be visible over parts of Europe, India, Africa, Asia, and Australia.

5 June will host the second Lunar eclipse of 2020. It will be visible over Africa as well as parts of Europe, India, Asia, and Australia.

The third Lunar eclipse will occur in the first week of July 2020. This eclipse, beginning at 08:38 a.m., will be visible over Southwest Europe, America, and Africa.

The last Lunar eclipse will fall on 30 November 2020 and will be visible in some parts of Australia, Asia, the Pacific ocean, and America.

Click Here To Get Detailed Information About Lunar Eclipse 2020 .

An inauspicious time, before and during the Solar and Lunar eclipses, is known as the Sutak. No auspicious tasks should be done at this time because it is believed that doing so only offers negative results. Although, almost all jobs are prohibited during Sutak Kaal, however, there are still specific tasks advised, to avoid the adverse effects of the curse.

When Does The Sutak Begin?

The Sutak Kaal is that period during an eclipse when almost all tasks are prohibited. Therefore, one needs to know when and for how long the Sutak Kaal occurs. The time between one Sunrise and the other adds up to eight prahars. Therefore, calculating the 24 hours of the day, we realise that one prahar equals 3 hours.

Pregnant women should pay homage to God during the Sutak period. This gives positive energy to the baby in their womb. Additionally, they should avoid dirty and impure places at this time. Doing so saves the infant from the negative aspects of Rahu and Ketu. They should also steer clear of tasks like sewing, weaving, embroidery, etc. It is believed that if a woman does these tasks during the Sutak Kaal, then it harms the baby’s body parts. Chanting mantras associated with the relevant planets of the eclipse also offers positive results to pregnant ladies.

Mantras To Chant During Sutak

To avoid the negative effects of Sutak, one should chant the following mantras:

There is an old fictitious tale mentioned in the Hindu scriptures, about the eclipses. The story states that the demons Rahu and Ketu curse Sun and Moon for revenge and out of malice. How this enmity began is explained in this story.

A long time ago, the Samudra Manthan (Churning of the Ocean) was going on between the Lords and the Demons. As a result of the same, 14 gems came out of the Ksheersagar (Ocean of Milk) at the time. One of these was the Amrit, the Nectar of Immortality. The story goes, that whoever drank this nectar had eternal life, and nobody could kill him or her.

Understanding the virtues of the Amrit, everybody wanted to drink it. The Lords claimed it as theirs, while the Demons named it under their authority. A fight broke out between the Asuras and Devas over it. The Asuras won and snatched the Amrit from the Devas. However, if they had drank the nectar, an imbalance would have been created in this world, causing the death of Shrishti (creation) as we know it. Therefore, Lord Vishnu took the avatar of a beautiful apsara named Mohini and enticed the demons into giving him the pot of Amrit. The demons agreed to share the Amrit with the Lords on Mohini insistence and a promise of equality. Lord Vishnu, in his Mohini form, started distributing that Amrit amongst the two parties.

However, he was very cleverly offering the nectar to the Lords, but only a simple wine to the demons. Understanding his deceit, a demon named Swarbhanu came and sat with the Lords. Just as he was about to drink from the pot, the Lords Sun and Moon recognised him and pointed him out to Lord Vishnu. As soon as he found out, Lord Vishnu cut Swarbhanu’s head from his body using his Sudarshan Chakra. But, by then Swarbhanu had already taken a sip of the Amrit. Therefore, even though the Sudarshan Chakra cut his body into two; however, both the parts were now alive. From then on, the head was called Rahu, and the body Ketu.

Ever since then, it is believed that Rahu and Ketu, out of their resentment towards the Sun and Moon, take revenge on them by cursing them regularly. This curse is visible to all in the form of Solar and Lunar eclipse.

We Hope That Our Article On Eclipse 2020 Was Informational For You!