Baisakhi is one of the most important festivals of Punjab. It is observed to commemorate the establishment of Khalsa and thank God for giving us such a good harvest. The importance of this festival can be known after knowing the story behind it. Find out the Baisakhi 2020 date and know the religious reason behind its observance. Know what are the holy “K”s that define the existence of the Khalsa and Sikhism and multiple ways to celebrate it. Wish your loved ones a Happy Baisakhi and know how Baisakhi in 2020 proves to be special for you and your loved ones. 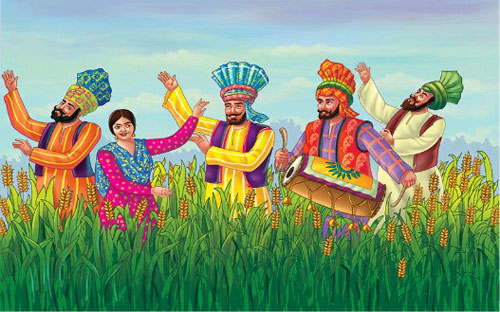 Baisakhi in 2020: Date of Occurence

This year, Baisakhi will be observed on Monday, 13th April, 2020. Hinduism celebrates the festival of Vaisakhi as a New Solar Year based on Vikram Samvat Panchang. It marks the beginning of a new harvest and is celebrated as a spring harvest festival in many parts of Northern India. On this auspicious occasion of Vaisakhi 2020, the Gurdwaras are grandly decorated with lights and flowers. The natives perform the kirtans, bathe in holy lakes, carry out processions called nagar kirtans and organize local fairs.

Vaisakhi 2020: Legend Behind The Celebrations

Again on Baisakhi 2020, celebrations are going to change the look of Punjab. People of Sikh community are again going to put a lot of effort in celebrating Baisakhi the best festival of the year. But, why do they celebrate the festival with so much dedication and devotion? Let’s now know the legend.

Initially, hearing this statement, none of the people emerged from the crowd, but a young boy willingly said that he was ready for the sacrifice. By seeing his courage, 4 more men emerged out of the crowd. Since then, these 5 were named as the “Panj Pyare” (the beloved ones), the ones who could die for the sake of humanity.

Post this, Sri Guru Gobind Singh Ji sprinkled “Amrit” (the holy water) on these 5 beloved ones and himself. They were then the “baptised Sikhs”, who were given the name “Khalsa”. Since then, the festival of Baisakhi is being celebrated in the entire world by the Sikh community. The real significance of this festival and Sikhism can be best understood with Sikhs pledge towards "the 5 holy Ks". Let’s now know what are the 5 holy ‘Ks’.

The 5 “Ks” of the Sikh community mark the real significance of Sikhism, a real Sikh is a promising soldier, a warrior who works for the protection of others and live a spiritual life. It is believed that a real Sikh is the one who adopts these 5 “Ks” and follows them throughout his life. These 5”Ks” are as follows:-

As per Sikhism, it is believed that a real Sikh is the one who works selflessly towards the betterment of the community and follows the path of equality. The biggest example is their surname 'Singh' for males and 'Kaur' for females. Baisakhi is a festival in which every Sikh irrespective of the place - stays in, visits the Gurdwara, and offers Seva (cooking, cleaning and washing the utensils) towards mankind.

Similarly, Baisakhi is considered to be a new start for the farmers, especially in the Northern part of India i.e Punjab. So, be a part of this holy celebration on Baisakhi to get the pleasure of serving humanity.

In the ancient times, when farming, agriculture was the sole occupation of most of the people in India. Vaisakhi or Baisakhi was celebrated in the biggest and brightest form. In today’s time, when the new ways of cultivation and farming is taking place, the harvest festival holds the same significance for the farmers. The celebration is grand and huge. The ladies and gents sing, dance (Giddha and Bhangra), and many more sporting events that take place throughout the day. This day holds the same significance like in the ancient times, as it marks the new beginning of the Sikh calendar, where praying, worshiping in Gurdwara, and thanking God for the harvest are done by the followers.

The holy teachings led by Sri Guru Nanak Dev Ji are still prevalent and practiced across the Sikh community. Langar (the free food) is the part of his teachings, which served free of cost in the Gurdwaras.. Now, you know everything in brief about this glorious festival of Baisakhi, but we don’t stop here because this festival also has special significance in other religions too. Let's read more to make Baisakhi more special.

Significance Of Baisakhi Throughout The Country & Globe

India is such a diverse country with so many religions across. Baisakhi in 2020 is one of the festivals celebrated across for various reasons. In the southern part of the country, it is the beginning of the New Year. In Kerala, it is known as Vishu and celebrated with lot of enthusiasm. Similarly, in Orissa, it is given the name Naba Barsha (New year).

In the eastern part of the country, especially in Bihar, Lord Surya (Sun) is worshiped and the occasion is named as Vaishakha. Similarly, in Assam, it is the time of the new beginning of the year and rice is sowed during this time. Hence, this is the time when Rongali Bihu is celebrated. Baisakhi also has a very special significance in Buddhism. Let’s know about it.

Buddhism, a religion established by Gautam Buddha, has a great significance on the lives of Buddhist people. It is believed that on this day Gautam Buddha attained Nirvana or salvation in Gaya. Since then, this day is celebrated as Buddha Purnima. It means that the day of Baisakhi is quite holy for many people around the globe.

It is also believed that the Arya Samaj Dharam came into existence on the day of Baisakhi. Swami Dayanand Saraswati established the Arya Samaj in the year 1875 on this particular day. Since then, this day holds a special significance in the lives of Hindus.

Baisakhi is a festival which marks the new beginning. It is considered to be the holiest day in the Sikh calendar. A day on which the Sikhs got a new identity. It is the time to remember the teachings of Guru Nanak. One of the main teachings says that everyone is equal; and its biggest example is the architecture of the Golden Temple, which consists of 4 entries, symbolising that people from all the four corners of the world can visit the holy shrine. It also signifies that worship of God is free irrespective of any religion, caste and creed. Any person, be it Hindu, Muslim, Sikh or Christian can visit the shrine and his whole life should be dedicated to work selflessly towards the service of God and mankind.

Baisakhi might be known by different names throughout the world, but the message remains the same that is the new beginning or a new start, and thanking the Almighty. So, join hands in the celebrations of Baisakhi festival in 2020 and have fun! Hope now you know about Baisakhi date in 2020 and prepare well.