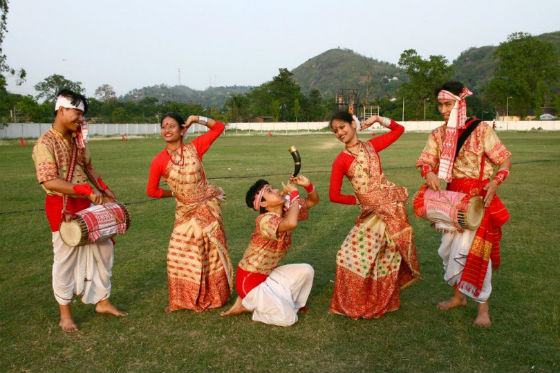 The word Bihu traces back its origin to the Sanskrit word Bishu, where ‘Bi’ means 'to ask’ and 'Shu’ stands for ‘peace and prosperity’. However some people believe that Bihu is the amalgamation of the words 'Bi’ and 'Hu’, where 'Bi’ signifies 'to ask’ and 'Hu’ means 'to give’. The festival of Bihu coincides with Pongal and Makar Sankranti. People begin their day by getting up early and taking a bath to purify themselves. Delicacies are prepared to add spice to the grand celebration. The point to be noted is that all the food prepared on the day of Bihu is prepared using the new crops. These preparations are then offered to the Almighty to get blessed.

Bihu is a colorful festival which brings happiness and prosperity in the life of the people. It is a boon for the farmers and peasants and is celebrated with pomp and fervour by them. As it is associated with the harvest, it has gained more popularity among the common masses. On this day, the people of Assam dress up in their cultural dresses and adorn themselves with ornaments in the best possible manner. It is customary to take a bath with pure turmeric in this day. People generally buy new clothes for this occasion. After performing Puja, they enjoy the day by relishing their taste buds with the delicacies prepared on this day. Petha ladoo is the main dish of the day. The speciality of this festival is that its celebration is not confined to one day. The festival is celebrated for seven days long during which people enjoy themselves to the fullest.

Seeking the blessings of elders is considered to be very important on the day of Bihu. People distribute sweets and present gifts to their near and dear ones on this day. The day brings families and friends closer to each other. Fairs and processions are organised at several places. Although Bihu is majorly a festival of Assam, it is celebrated in many other regions of India as well. The festival is celebrated on the first day of Magha month in the Bengali culture.

Rituals and customs related to Bihu

Magh Bihu is a festival of joy and celebration. It is also known as Bhogali Bihu by some people. As it marks the end of the harvesting season, people celebrate it by performing these activities:

We hope that you liked this article about Bihu. May this festival brings positivity in your life. Best wishes!