Chandra Grahan in 2017 is on the 11th of February and 7th of August. Being a wonder of Astronomy in which moon is shadowed partially or completely for a short period of time, it holds a significant effect on the lives of the people. So, to know the effects of the Grahan and how to counter it? You should go through the mythologies associated to it which are mentioned below.

Full Moon: Full Moon occurs when Moon comes directly opposite to Sun, or they differ by an angle of 180 degrees. Our natural satellite or Moon rotates around the earth in a period of 29.5 days, i.e. a month's period. In fact, the name 'month' of 30 days period is inspired by Moon's rotation around earth. The Full Moon occurs once in every month. But, lunar eclipse or Chandra Grahan is not observed every month because of different orbital angles of earth, Sun, and Moon.

Lunar eclipse or Chandra Grahan is divided into three categories:

Now, let’s understand them in detail.

Penumbral lunar eclipse (Khand Chaya Yukta Chandra Grahan) occurs when Sun, Moon, and earth, do not form a perfect straight line. Moon comes under the effect of earth's shadow, but some of Moon's part still receives the direct sunlight. This type of Grahan or eclipse is hard to observe.

Lunar Eclipse Or Chandra Grahan In 2017

Total lunar eclipse (Sampurna Chandra Grahan) occurs when the entire Moon comes under the effect of umbral shadow of earth, or the Moon is completely covered by the earth. The observer from the night side of earth is able to view the Grahan or eclipse clearly.

In the month of August in 2017 also, Moon will undergo all these positions and a total lunar eclipse will be observed.

Lunar Eclipse Or Chandra Grahan In 2017

For more information, refer to the table given below on Chandra Grahan or Lunar eclipse in 2017.

*Note: Penumbral Lunar Eclipse is not an actual lunar eclipse. In this eclipse, the moon doesn’t move from the shadow of the earth, instead it moves through the outer part of the earth’s shadow where its arc gets slightly dusky.

*Note: Penumbral Lunar Eclipse is not an actual lunar eclipse. In this eclipse, the moon doesn’t move from the shadow of the earth, instead it moves through the outer part of the earth’s shadow where its arc gets slightly dusky. 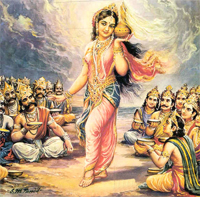 According to the Matsya Purana, at the time of Samudra Manthan (churning of ocean), everything which came out from the ocean was distributed equally among the gods and demons. When Amrit (drink of immortality) came out from the ocean, all the gods and demons got anxious for drinking it. But, gods had to take care that no demon would be able to consume the divine nectar (Amrit). If this would have happened, the demons would become immortal, which was not in favor of establishment of peace on earth.

For this reason, Lord Vishnu played a trick and transformed himself in the form of a beautiful lady called Mohini. All the demons got attracted; they asked Mohini (Lord Vishnu) to offer them Amrit, as they wanted to drink Amrut (divine nectar) from the hands of a beautiful lady.

Mohini accepted the proposal, as Lord Vishnu transformed himself in the form of Mohini for this reason only. She offered some ordinary liquid to demons and the real Amrit to God. A demon named Swarbhanu observed and understood the trick, he sat with the gods in between Lord Sun and Lord Moon.

When Swarbhanu was receiving Amrit, Lord Sun and Lord Moon recognized him and they immediately stopped Lord Vishnu (Mohini). Lord Vishnu cutted down his head from his body, in order to destroy him. But, by then, he had already consumed some amount of Amrit. Swarbhanu's head portion is known as Rahu and his body is known as Ketu.

According to the stories, Swarbhanu believes that Sun and Moon are responsible for his present condition and thus, sometimes he appears in form of Rahu to hold Sun and Moon in his mouth, which results in Grahan or Eclipse.

Reason For Closing Of Temples During Grahan

What Is Sutak In Chandra Grahan

Sutak is a certain duration of time before the period of Grahan or Eclipse. In Chandra Grahan, Sutak is generally observed for 9 hours (3 Pahar). This time is considered as inauspicious, as it is believed that during this time, the atmosphere gets adulterated with harmful energies of Rahu and Ketu.