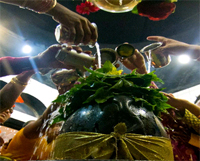 The auspicious month of Sawan in 2020 begins from July and lasts until August. Know the Sawan Somvar 2020 Dates and attain the blessings of Lord Shiva. This month beautifies the souls of devotees and the nature around. Make the most of this very special month of Shravan and be a part of God’s endless favor.

Here are the different important Sawan 2020 dates according to the northern and southern parts of India. Know the Sawan Somvar dates in 2020 along with other Hindu festivals and fasts.

Significance of The Month of Sawan in 2020

Sawan month or Shravan month holds a great significance and is considered to be the most sacred month, according to Hindu mythology. This month is blessed with the blessings of different gods, especially Lord Shiva. Shravan is the fifth month, according to the traditional Hindu calendar, which falls during the Gregorian months of July-August. The month is called Shravan or Sawan because Shravana Nakshatra (constellation) appears in the sky during this month.

Sawan month is considered to be the most auspicious month for worshiping Lord Shiva. He showers his limitless favor on his devotees in the month of Savan. Along with the special Sawan Somwar (Mondays) and Sawan Shivratri, the whole month of Sawan holds great significance for all the devotees of Lord Shiva. Savan also celebrates the divinity of Lord Vishnu, Lord Krishna, and Maa Lakshmi. So, come, let’s read about the significance of Sawan. Here are some important dates and days of the festivals during Sawan:

Days During The Month of Sawan

After knowing about the different days, dates, and occasions of month Sawan, let’s now read about the significance of Mondays in month Sawan in 2020.

It is believed that performing Sawan Somvar Vrat produces highly auspicious results. Lord Shiva and Maa Parvati are worshiped during these fasts in the month of Savan. Lord Shiva blesses his devotees with the boon of desired wishes.

There are mainly three kinds of Somvar Vrats (fasts) according to the ancient stories. These are Somvar, Solah Somvar, and Somya Pradosh. The starting of Solah Somvar or Somvar Vrat in the month of Sawan is considered as highly auspicious. The Puja Vidhi or Vrat Vidhi (method of fasting) is similar in all kinds of fasts.

Sawan Somvar Vrat starts from the sunrise and continues till the third Prahar (evening) of the day. The devotee who observes the fast can consume the meal (Satvik Khana) once a day, after listening or reciting the Sawan Somvar Vrat Katha.

Here are some points that a devotee should keep in mind, while performing Sawan Somvar Vrat.

By following the above given points, the fast of Sawan Somvar in 2020 can be observed during Sawan. Now, let’s read what auspicious outcomes can be obtained by performing Sawan Somvar Vrat with full devotion.

Get Your Perfect Match: Horoscope Matching

Observe Sawan Somvar Fast in 2020 and earn the blessings of Lord Shiva.

Sawan 2020: Why We Worship Lord Shiva During Sawan?

According to the traditional stories, churning of the ocean (Samudra Manthan) took place in the month of Shravan. Different precious items came out from the ocean that were equally distributed among the gods and demons. But, some items were of those kind also, which were not expected by any of gods or demons, like poison (Halahala).

So, to save the world from the bad effects of poison, Lord Shiva consumed poison and stored it in his throat. His throat turned blue, because of the dark color of poison. Due to this reason, Lord Shiva was attributed as Neelkanth. In order to honour Lord Shiva for consuming poison and saving the world, the whole month of Sawan (Shravan) is dedicated to Lord Shiva.

Sawan in 2020: Significance Of This Holy Month

Sawan is also known as the month in which the weather becomes pleasant all around. It seems as if nature is regaining its beauty and freshness in the month of Sawan or Shravan once again. Rainy season begins and the earth feels relieved after the hot season of Summer. It appears as the whole universe is devoting itself to Lord Shiva by pouring water on him in the form of rain. Water level on earth also increases in the month of Saawan.

Sawan holds a great significance for the devotees of each lord who is paid homage during this month. All the wishes and desires of devotees' get fulfilled, who worship with full faith and devotion. Lord Shiva showers his blessings and favor in the month of Sawan or Shravan. Devotees carry Kavad on their shoulders to pay their reverence to Lord Shiva. Now, let’s take a summarized view and know what is a Kavad.

Kawad is a rod or stick, whose both ends are tied up with pots. These pots are used for fetching the holy water of river Ganga from Haridwar. Kavadiya or the devotees of Lord Shiva, prepare and decorate these Kavadas at their homes and carry them all the way to Haridwar. They also have to take care that the Kavad filled with holy water of river Ganga should not touch the ground.

The holy water of the river Ganga is used by them for Abhishek (coronation) of Lord Shiva's Lingam in their local area's temple. Some Kavadias (Lord Shiva’s devotees) cover this journey by walking bare feet from their states, whether it is Uttar Pradesh, Delhi, Haryana, Bihar, Punjab etc. and some also use the means of transport such as buses or trains to reach Haridwar. They carry special Shravan images of Lord Shiva and sing special Sawan songs.

How can we forget to talk about the significance of Saawan month for the unmarried ladies? Unmarried women observe Sawan Somvar Vrat to get their desired husbands. It is believed that Maa Parvati observed the fasts of Saawan Somvar to get Lord Shiva as her husband in her 108th birth. Since Monday is considered to be the day of Lord Shiva and thus, its significance doubles up during the month of Saawan or Shravan (the month of Lord Shiva). Ladies sing special Sawan songs for adding on the divinity and beauty in the month Sawan.

Every year, Sawan come again with the same enormous significance.

How To Worship Lord Shiva this Sawan?

Worshiping Lord Shiva during Saawan Somwar is considered 108 times more favorable than normal days. Lord Shiva fulfills all the wishes of his devotees.

Similar methods are adopted by Lord Shiva devotees' to please him. This includes pouring of Panchamrit (milk, curd, honey, sugar, and Ghee) for Lingam Abhishek. After that, special offerings of flowers, sandalwood, dry fruits, Bel Patra (Angelo Marmelos), and Datura etc. are made to Lord Shiva. Other than this, Puja-Aarti should be done with Kapur (camphor) and Dhoop (incense sticks). All the desires of Lord Shiva devotees' are fulfilled by observing the Sawan Somwar Vrat.

Read out these important points and know how to worship Lord Shiva in the month of Shravan:

The sacred Mantras of Lord Shiva, whose recitation can produce highly auspicious results are:

Meaning: Om, we worship the three eyed god, who nourishes all beings. May he frees us from the cycle of birth and death and bless us with Moksha .

Meaning: We show respect and pay reverence to Lord Shiva.

Observe all the fasts with full devotion in the godly month of Sawan and stay blessed. All you need is to pay your devotion at the Lord's feet with a pure heart. With the incoming Sawan month, just as the rains fall down to water on the earth, in the same way, god will surely bestow his blessings on his devotees.

Have a happy and devotional Sawan..!